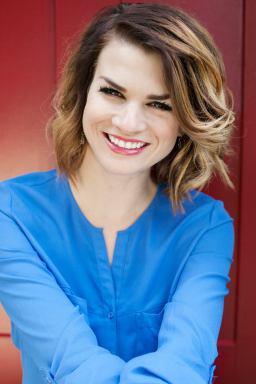 “After spending over a decade on stage and in front of the camera as a professional actor and singer, I decided I wanted to come out of the spotlight for a bit and found my calling behind the scenes. I have now written and directed two internationally distributed faith-based films, Secrets in the Snow and the sequel Secrets in the Fall, as well as multiple music videos, including the award winning “December” music video by Spaceship Days. My love for writing and developing characters spans from the screen to the page, and I am thrilled to release my debut YA novel, If You’re Gone!”

Now onto the interview!

On your website under your name is the slogan “every character deserves a voice.” Is this a personal motto for you when your write? How did that particular slogan come about and inspire you?

“First off, thanks for taking the time to check out my website! My slogan, “every character deserves a voice” just popped into my head one day and it seemed like the perfect motto for my writing. I love to write about “average” characters, who may or may not be experiencing extraordinary events, as well as underrepresented characters. In If You’re Gone I was inspired to give a voice to someone who is directly affected by a missing loved one, who in this case was a girlfriend instead of a family member.”

Your book If You’re Gone came out June 20, congrats! Tell us about your journey of writing and publishing this YA novel.

“Thank you! What a journey it has been! Writing the novel seems like a breeze compared to the steps that came next! Editing, more editing, submitting, receiving rejections, making choices on and off the page, getting discouraged, becoming re-inspired… the road to publishing really is a rollercoaster. If You’re Gone is my first novel so there has been quite a learning curve, and I definitely made some mistakes I have learned from. (For example, I sent out queries before my final draft was completely ready, expecting a had several weeks/months before I got responses. Much to my surprise, I received multiple full requests within a matter of days and than I had to send off a less than perfectly polished novel. Rookie mistake #1!)

What made you decide to try the indie publishing route? How has your experience been so far?

“Like most every aspiring author, I initially attempted to break into traditional publishing by submitting to dozens, and dozens, and dozens of literary agents. The total number is near 100 and every day was a new high or low. (Agent X requested a full 5 minutes after I sent my query, four months later she still hadn’t read it and I eventually gave up contacting her. Agent Q requested a full two days after a sent it and less than an hour later it was rejected. Agent Z requested a full, would send intermittent updates stating she needed more time, then ultimately rejected it when I told her I had contract offers. Two months later I got another rejection from her stating the book wasn’t right for her list- making me assume she never read it the first time! What a headache!)

Pretty early in the agent submission process I also began submitting to independent publishers and was blessed enough to receive multiple offers- so I was quickly thinking “thanks but no thanks” about literary agents. (I don’t discredit the work they do for many authors, however I didn’t find the right agent for me!) In the end I decided to publish through Edge of 22 Publishing, which is an imprint of Every New Day Pictures, the production company I own along with my husband, and I don’t regret it for a minute. It allows me to maintain more control over my final product (I’m not a control freak, I’m not a control freak…) and also speed up the publishing timeline because we are only focusing on a few projects at a time. Our media and publicity background, along with our network of authors and industry professionals, has set us up with the tools to successfully launch If You’re Gone and we are planning for upcoming works from other authors interested in independent publishing!

I truly believe Independent Publishing is the Big 5 of the future and I highly recommend that all authors who are holding out for that “big deal” to consider it. I wasn’t patient enough to hold out for my big deal, instead I created it for myself and I am responsible for my own success!”

I love this snippet from your Goodreads page, “…a self-proclaimed armchair detective, Brittany is an active member of many Missing Persons blogs and Facebook pages…,” and couldn’t help but wonder at your interest in missing people. How did that come about?

“In 2009, I worked as a singer on a cruise ship and frequented the islands Aruba and Curacao. It wasn’t until I returned to the US that I learned of the cases of Natalee Holloway and Amy Lynn Bradley, who disappeared from these Caribbean islands. Long story short, I think my interest first started because I realized “that could have been me”. It’s terrifying to think about, but I walked the same streets these women vanished from, sometimes alone. I began watching “Vanished with Beth Holloway” and “Disappeared”, as well as spending a lot of time reading up on missing persons cases online, and I just found it so incredible that people could disappear without a trace, and I wanted to help find them. I’ve spent dozens of hours on NAMUS, attempting to match unidentified remains with missing persons, and I’m always searching the faces of homeless or drifters.

It can be a very depressing interest to have, because it is so heartbreaking to watch the families who are reeling because their loved one is missing, but if I can help bring exposure to the cause it is worth it.”

You are also a screenwriter. Do you find novel writing easier, harder, or about the same as a screenwriting?

“I have to say I find writing a novel significantly harder than writing screenplays! I think this is, in part, because I write my screenplays very visually with plans to direct them. In my first two films, Secrets in the Snow & Secrets in the Fall, every little motion I picture the characters making is included on the page in the action (cough, control freak again) and then it is brought to life in front of the camera. I had to figure out how to write my novels just as visually, but “showing instead of telling”. I’ve already written a significant chunk of a screenplay for If You’re Gone, which actually wasn’t easy because I am working on adapting it for the screen from the pages of the book! I guess no writing is truly “easy”- but I enjoy every second of it!”

If You’re Gone is a YA mystery, but it is also a coming of age story about first love and first loss. I hope all my readers will also leave a review to encourage others to get a copy!

If you want to purchase a copy of If You’re Gone click here for all the buy links- http://www.edgeof22publishing.com

If you want to check out my films, click here- www.everynewdaypictures.com

If you want to see the If You’re Gone playlist and find other fun info, click here- www.brittanygoodwin.com

A big thanks to Brittany for taking the time to interview with me.

Plus congrats again on your new novel!

One thought on “Interview with Brittany Goodwin”