It’s hard to believe One Was Lost is finally here.  It feels weird to admit that I’ve been desperately looking forward to scaring you all and keeping you up way past your bedtimes, but it’s the truth.  And now that it’s finally out in the world, I just can’t wait to hear what you all think!  I mean, after you get some sleep of course.  I’m not that impatient.

As a writer with my fourth book hitting the shelves, I can say each new release has its own special brand of excitement.  Each story has elements that you cherish and characters you love.  But One Was Lost wasn’t like any of my other books.  Writing this book was a whole new ball game.

The truth behind One Was Lost is that my father died a few months before I started writing it. He was my inspiration for writing as a child and easily one of my closest friends throughout my life.  Losing him was like having my foundation knocked sideways.  My grief felt oceans deep and I was lost in the roll of every wave. It was brutally difficult.

For anyone who’s met me and knows what a class clown I am, I’ll confess 2015 was one of the least funny years of my life.  Still, when I sat down to write One Was Lost, I knew I had something special.  These characters were speaking to me like characters never had.  This story was at a roiling boil in my head—but, could I really write it?

Doubt plagued me in those first days. Could I still remember how to get lost in a story? Could I get it right when I was still struggling so much? Most importantly, could I still be the writer I used to be?

The answer was quick and a little terrifying.  No.

I couldn’t go back to the writer I was before.  Losing someone incredibly important to you changes you.  There is a new normal you must adjust to, and that new normal doesn’t fade away after the funeral is done and over.

My new normal proved to be a very powerful force in my writing life.  One Was Lost forced me to face fears I might have danced around in other books. I had no choice but to dive more deeply than ever before. My new perspective had me spend more time than usual learning about these new characters.  Trying to understand them.  Hurting with them and fearing with them.

I didn’t just lose myself in One Was Lost, I drowned in it.  I fell so deeply into this book that at times it was difficult to resurface to do normal, mundane not-lost-and-terrified-in-the-forest things.  I’m not sure I’ve ever been more in love with characters in any of my stories, and I’m absolutely sure I’ve never been happier with the way a book has turned out.

It is my dearest hope that you’ll all get a little lost in this book too. Sometimes even the scariest things can bring out strength and goodness we never believed possible. And it is just that reason that One Was Lost is a book I’m so particularly proud of and excited to share with you.

Damaged. Deceptive. Dangerous. Darling. Are they labels or a warning? The answer could 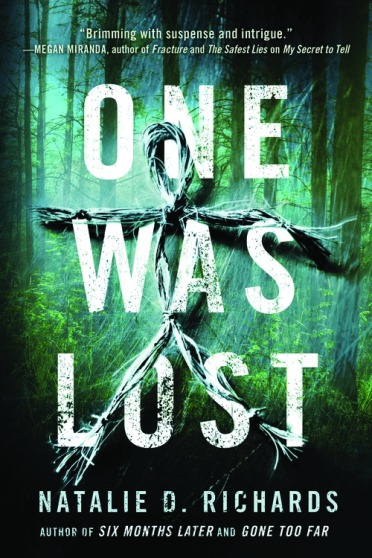 While on a mandatory senior field trip, a flash flood cuts off Sera and three classmates from their group with no way to call for help. But they’re not as alone as they thought…

Someone is stalking them through the woods. Someone who drugged them, stole their supplies, and wrote on their skin. Is it a judgement? A warning? If Sera doesn’t uncover the truth, it’s only a matter of time before the hunter finds her.

After years as a professional paper-pusher, NATALIE D. RICHARDS decided to trade in reality for a life writing YA fiction. She lives in Ohio (Go Bucks!) with her husband, three children, and a ridiculously furry dog named Yeti. This is her third novel. Visit her on Twitter @natdrichards or at nataliedrichards.com.

An Excerpt from One Was Lost

No one said anything about rain in the brochures. Not that there were brochures. There was a handwritten sign-up sheet in the cafeteria, followed by permission slips recycled from ghosts of field trips past. I’m not really sure why I was expecting a world-class production. Must be the director in me. I stumble under the weight of my pack, sloshing through a puddle. Cold water oozes through my boots and socks. So much for Mr. Walker’s plastic ponchos keeping us dry. I guess after six straight hours of rain, dry is relative anyway. “I hope you packed your dirty clothes in the plastic bags I handed out last night,” Mr. Walker booms from the front of the line. “They might stink, but they’ll be dry.” The other girls cringe a little at the idea—all except Ms. Brighton, our younger, cooler teacher guide. She’s very Zen about these things, nodding along in her crystal earrings and mud-dyed Gaia Mother T-shirt. I’m in the last half of the group, behind Jude with his ever-present earbuds and imperious gaze. Since I’m five-two, the back of his poncho is about all I can see, but it’s better than looking at Lucas. Anything’s better than looking at Lucas.

Even behind me, I can feel him. Looming. Everyone’s tall measured against me, but Lucas is ridiculous. He towers. If there were actually a sun to be found in this Appalachian monsoon, his shoulders would cast a shadow you could hide two of me in. I have no idea what you have to eat to grow like that. Corn? Eggs? Small children?

I trudge onward, slowing to shift my backpack. The right strap is digging a painful trench into my shoulder, and I can’t find a way to move it. My poncho slips with the effort, and a river of icy water slithers down my back.

“Holy crap!” I say, arching in a futile effort to escape.

I grit my teeth and walk on. If I respond, I might have to look at him, and I’ve worked very hard not to do that. I’ve not looked for sixty-two days. It’s a pretty good track record. I’m not going to wreck it just because he ended up on my Senior Life Experience Mission. At the last possible minute, no less.

“Is this really top speed for you?” he asks, sounding like he’s on the verge of a laugh.

I stare at the line of backpacks and ponchos ahead of me, resist­ing the urge to snap back at him. I need to be the bigger person here. It’s not like I don’t know why he’s picking at me.

“Still sticking with the silent treatment?” he asks. “Gotta give it to you, you’re committed. Slow-moving as shit but committed.”

I whirl around. I shouldn’t—I know I shouldn’t—but the words blurt out. “Newsflash, Lucas! I’m moving as fast as I can. Not all of us are loping around with giraffe legs like you, so if you’re in such a rush, feel free to move ahead.”

He steps closer, and it happens. I see him. Really see him.

He tilts his head until his face is visible inside his plastic hood. How does he do it? He’s just as wet and miserable as the rest of us, but somehow, he’s owning the hell out of a poncho that makes me look like I need a zip tie and a trip to the curb.

I should walk away, at least look away. Lucas is all sharp lines and hooded eyes, and I should have learned my lesson. Because standing here brings me right back to that night on the porch. My ears go buzzy with the memory of crickets singing and the backdrop of the cast party inside. My face tingles because I remember other things too—his scratchy jaw and soft mouth and my heart beating faster than it ever should.

My gaze drifts to his smirk and lead pools in my stomach. That’s what I’m really mad about. It’s not his teasing or the rain or anything else. It’s the fact that he turns me into the same flut­tery mess I was all summer. He still turns me into my mother, and I hate it.

I try to move away, but he catches the edge of my poncho— keeps me facing him. “Huh.”

“Look who suddenly remembers me,” he says softly.

“I won’t,” he says, though his grin needs a parental advisory label. “I didn’t then, did—”

Lightning flashes, bright enough that we both jerk.

The sound that follows is like the sky being torn in two. It ends with a bone-deep rumble that rattles the ground and bunches my spine. I close my eyes and take a breath, yoga-slow. It doesn’t cleanse anything, so I try another.

Across from me, Lucas is searching the sky. I take the oppor­tunity to turn and bolt ahead on the trail. Not that there’s anywhere to go. Away from him is good enough.

I plow into Jude’s back in my eagerness to escape. He spares me one millisecond of irritation, and then he’s back to pretending we’re all part of the scenery.

The trail widens here, or maybe the forest is less dense. Who knows? It gives me enough room to move past Jude until I’m next to Emily, my tent mate for the last two nights.

Emily looks back at me—a sparkle of dark eyes under her poncho—and her mouth twitches. Is she smiling at me? That’s new.

She ducks her head. And that’s as close to a conversation as we’ve gotten. I sigh. We have three more days of awkwardness in the woods. Three. More. Days.

RAFFLECOPTER G I V E A W A Y