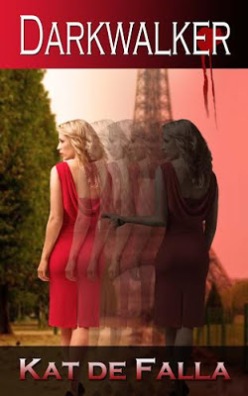 For years, Seamus Bran has been a hermit in a small English town. But when two seers arrive from America seeking the cup of salvation his family has hidden for over two centuries, Seamus must decide whether to protect his blood line or save a woman he’s never met.

Adrienne Perdu is a wealthy orphan living in Paris. She has no idea the weekly meetings she attends are a group of Darkwalkers, pulling humanity in the selfless dredges of soullessness. But Seamus changes everything with a kiss. The illusion of her life is shattered when her eyes are opened to the world as it really is, with angels and demons walking among us.

At Mont Saint-Michel, a rocky inlet in Normandy, France the demons attack trying to gain possession of the Cup of Salvation. As Adrienne and Seamus grow closer, the danger of the ancient war between good and evil crescendos to envelop angels, demons, and seers alike. Will Seamus be able to save the woman he now loves and his family’s prize possession?

Buy on Amazon!
Book One (click on image for Goodreads link):

Get book one in The Seven Archangels Series, The Seer’s Lover, for only $0.99 for a
limited time on Amazon!
Also on sale for $0.99 for a limited time, First Contact! Amazon
Link
Excerpt:

“Split up!” Lucas called, charging left with three monks on his heels. They went head to head with the ground minions. Seamus and Dean went right, staying close to the two monks.

Lucas was surrounded. Three winged beasts swooped in trying to snatch them up, but Lucas and the monks managed to foil their attempts. The monks were ramming their heels, knees, elbows, and fists into any attacker in their way. Lucas drew his Wakizashi swords and began slashing demons, spilling their intestines, and severing heads from bodies. The scene was reminiscent of a Middle Age killing field. He knew he needed to gash open a pathway like a maggot eating its way through flesh to find the demon leader.

Wiping the crimson life-forced infused fluid off his face, Lucas cast a quick glance at Seamus and Dean to see if they were taking advantage of the blood soaked opening he was creating.

A winged demon snapped the neck of one monk and tore the jugular out of another with his teeth. They were dying out here in the open, like a rabbit in an open field caught in the eyes of a raptor. Casualties amid clouds of black dust continued to litter the field.

“Move under the pillars,” Seamus yelled.

Lucas pulled back so they would be protected by the roof and support columns surrounding the grassy courtyard.

They regrouped. “Let’s harpoon that mother fucker and pull him down to us,” Lucas pointed to the blackhorned demon he’d identified as the leader. “If we can take him down, we might stand a chance.”

The hoard moved in like the fog off a stormy sea.

Kat was born and raised in Milwaukee, Wisconsin where she learned to roller skate, ride a banana seat bike, and love Shakespeare. She holds a Doctor of Pharmacy degree and is happily employed as a retail pharmacist. She is married to her soul mate, composer Lee de Falla and raising four kids together ala the Brady Bunch. The Seer’s Lover was Kat’s first book and she is working feverishly on four different series at the moment!

G I V E A W A Y:
a Rafflecopter giveaway
Blitz Hosted By:
YA Bound Book Tours