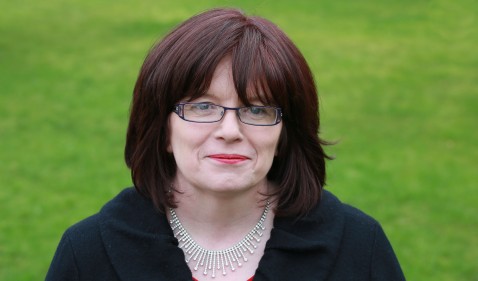 A leading journalist in Ireland for nearly thirty years, Ann O’Loughlin has covered all major news events of the last three decades. Ann spent most of her career with Independent Newspapers, where she was security correspondent at the height of the Troubles, and was a senior journalist on the Irish Independent and Evening Herald. She is currently a senior journalist with the Irish Examiner newspaper, covering legal issues. Ann has also lived and worked in India. Originally from the west of Ireland, she now lives on the east coast of Ireland with her husband and two children. Her debut novel The Ballroom Café has been published in the UK, Ireland, Norway, Italy and Germany and in the US by Skyhorse Publishing under the title The Secrets of Roscarbury Hall.
Her second novel The Judge’s Wife has just been published in Ireland and the UK.

Now onto the interview…

“You cannot bury the past. It always returns, demands to speak.” How do you set up a story that has such a heavily influenced plot line based in the past?

In the Secrets of Roscarbury Hall it is the actions of the past, the actions of those from before that influence the way the sisters live. It is, after all the secrets of the past that send American Deborah Kading to Ireland trying to trace her past. There is a main issue running through the novel; the forced and illegal adoption of Irish children to the US, a practice that continued up until the late 70s and 80s.

To set up the story line for a story that has a plot so heavily influenced by the past, it is necessary to write several stories in one, the stories of the past and the present for all characters.

The main issue running through The Secrets of Roscarbury Hall– the forced illegal adoption of Irish children to the US- serves as an anchor to all plot lines. This shameful practice meant young unmarried Irish girls were forced to give birth without painkillers; to look after their children for two or three years until the religious organisations deemed them ready for adoption. Some saw their children dressed up for a nice photograph which was then sent to prospective parents. Many of the children were simply taken from their beds; a lot of mothers did not get to say goodbye. Even those who wanted their children put up for adoption did not know that a home as far away as America had been found.

The religious organisations who arranged these adoptions to the US were given a generous donation for each child. There was no follow-up on these children and only in recent years, as mothers here have cried in public looking for their children, have men and women in the US come forward with stories of far from idyllic childhoods with their adoptive US parents. The practice was not confined to Ireland, but Australia has been the first to apologise. The challenge in The Secrets of Roscarbury Hall was to remain true to the issue but to wrap it in fiction in a story which included humour and uplifting moments. The Weiss brooches of New York- Ella unwraps a brooch at key moments in the novel and the gorgeous cakes that Ella bakes for the café all provide a nice contrast to the main issue.

What are your thoughts on redemption and how it comes to play out, or not play out, for all your characters in The Secrets of Roscarbury Hall?

All of the characters change as the story develops. I can’t think of a single one who has not been affected by what has happened. I also hope the reader is drawn in and touched by the story.

I don’t want to give away the ending, but I will say that Ella and Roberta O’Callaghan  in the course of the novel have to confront the awful secret, which has left them not talking to each other for decades. American, Deborah Kading who comes to Ireland to trace her roots must accept the information she eventually receives. She must also accept what happened in the past and that she can’t really change the future.

Tell me about the O’Callaghan sisters and how they came to become the protagonists of The Secrets of Roscarbury Hall.

I first came across the mothers who had lost their children to forced illegal adoption  many years ago as a working journalist; their dignity and the raw pain and shame they carried, almost unbearable to witness. One woman in her 80s wanted to see the son she had lost before she died; the pain of this mother, whose child had been taken from her, as raw as the day she lost him.

“I just want a chance to tell him I am sorry, but I had no say in it. It was all wrong, but mine was and is a small voice,” she said. Her voice was a small one, but unforgettable.

There were many other “small voices” over the years brave enough to tell their stories publicly; they cast aside the shame heaped upon them by a Catholic country for bearing an illegitimate child and shone a spotlight on the harsh practices of the past, which saw them treated as outcasts and their children taken, often without their consent, and sent to the US for adoption. It was these “small voices” that I drew upon to write The Secrets of Roscarbury Hall.

It was that woman in her 80s I could hear speaking, as I drew the character of Ella O’Callaghan. For every wronged person, there is the family and Roberta the sister fitted the bill perfectly.

Of course the two don’t talk and only communicate through notes, so this was the biggest challenge of all in the novel.

What was the turning point in the creation of The Secrets of Roscarbury Hall that made you realize this novel needed to be completed and published?

There was no grand turning point. Sometimes, a story has to be told. I think what really struck me as the story progressed was that this book was the life story of many of those women who lost their children to forced illegal adoption. I could hear the voices of those women who had lost their children, as I wrote the novel and it propelled me to reach the end and to find a publisher. The novel was published in Ireland and the UK first, but I am particularly delighted it is published in the US by Skyhorse Publishing under the name The Secrets of Roscarbury Hall. It means the story follows those children to the US and the pain of that terrible time reaches a wider audience.

Thank you Ann for the interview!