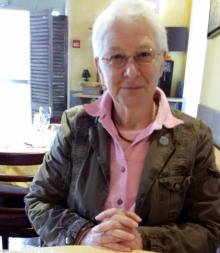 Lesley Krier Tither is a retired journalist, copywriter and copy edit or who now writes full-time. She started out in journalism as a court reporter and coroner’s court reporter in Greater Manchester. She later worked as a case tracker for the Crown Prosecution Service in Wales.

She has always enjoyed writing and at the age of just sixteen, she sold a storyline for an episode of the High Chaparral television series to Screen Gems Studios, California. She always claims that it remains the highest fee she ever received for a single piece of work.

After taking some time out of writing to indulge her other passion, horses (owning a holiday riding centre in Wales and later managing a large equestrian centre in Lincolnshire) she became a freelance copywriter and copy editor, working for a major advertising agency. She also worked as an investigative reporter for an international investigations company.

In 2007, she decided to leave the UK and move to France with her brother and their elderly mother, 89, who suffered from vascular dementia. When her mother died four years later, she began writing travel memoirs about her move to France, the Sell the Pig series, published under the pen-name Tottie Limejuice. The books went on to become best-sellers in many countries.

Crime fiction has always been her preferred genre to read and to watch on television so in early 2016, she wrote her first crime thriller in the DI Ted Darling series, under the pen-name L M Krier. There are now six books in the series, with a seventh under way: Baby’s Got Blue Eyes, Two Little Boys, When I’m Old and Grey, Shut Up and Drive, Only the Lonely, and Wild Thing.

Writing as L M Krier, she was also written a junior crime thriller (illustrated), The Dog with the Golden Eyes.

Whether you’re writing fiction or non-fiction, true crime or something entirely the product of your imagination, one thing is certain. Today’s reader is no fool. Almost everyone is armed with Google (other search engines are available) and is not afraid to use it.

Make a mistake somewhere in what you are writing and someone, somewhere, will pick up on it. I was pulled up for a taxi driver taking the wrong route to transport my main character, DI Ted Darling, to the police station when his car broke down.

In fiction, authors can hide behind the standard catch-all disclaimer: ‘This is a work of fiction. Names, characters, places and incidents are the product of the author’s imagination or are used fictitiously. Any resemblance to actual persons, living or dead, events or locales is entirely coincidental.’

In my case, the police station I write about is not the actual one in my old home town of Stockport, rather one situated in a deliberately unnamed part of the town, so, in fact, the taxi driver wasn’t going to long way round to hike up his fare. I got away with it – just – as my explanation was reasonable.

Try doing something like that in true crime or any other type of non-fiction and see what happens. A great friend of mine is a total WWII buff. His trips here are always punctuated with visits to Resistance museums. He was ranting to me recently about some wartime history he was reading which put a place north-east of somewhere when it should have been south-east. The point is that anyone who is passionately interested in a subject is likely to know it well – perhaps as well, or even better, than an author who writes about it. Unless they do their homework.

If, for example, you want to write about the famous Jack the Ripper case, you need to know your Canonical Five from the Pinchin Street torso. Because if you don’t, your readers well.

When you write non-fiction, you need copious and meticulous notes to avoid such errors. It’s a good idea to employ the same system in fiction writing, too. Suppose you embark on writing your first thriller or mystery, not really knowing if it’s going to morph into a series or not. You create a main character. For illustration, let’s make her an investigative reporter called Penny Arkwright.

Penny drives a Mini Cooper, likes Pink Floyd and lives with her mum. She’s always got her mobile phone clamped to her left ear, scribbling away in short-hand with the pen in her right hand. Fast-forward to Book 7 in the series and we suddenly have left-handed Penny scribbling away with the phone to her right ear.

Oops! If you’re very lucky, those who spot the error will email you or contact you on social media. If you’re unlucky, you’ll get a load of low-star reviews from angry fans ranting about how you’ve changed Penny part-way through a series. And that’s far harder to explain away than moving a police station.

My personal tip for overcoming such howlers? I keep a ‘Ted bible’ in which I make careful note of anything and everything about characters who recur. Mine’s untidy and scribbled in a Star Wars diary (all I could find in the shop at the time!) rather than a smart Excel spreadsheet.

But I do keep it, and update it, religiously. Because although I may forget things about my characters, the fans never will, and I respect them too much to make basic errors.