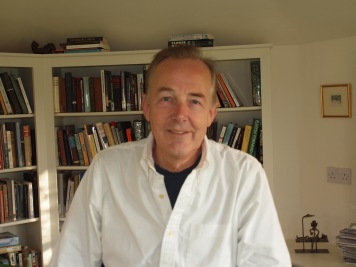 I’m Simon Hardman Lea and describe myself on my author pages as a cynical romantic who tries to write novels. (My day job is as a hospital based doctor). The background to my books is France during the years 1916-1922, the characters are a mixture of British, American and French, but although the whole sequence (The Lost Intensities novels) is set in and around the First World War, I don’t write war stories, or even historical novels really. I think of them as being stories about how men and women act under the extremes of pressure and danger, living in a time when history, heartache and high emotion meet.

The first book in my series – The Sins of Soldiers – was published in 2016, with the second – The Sorrow of Nurses – due to appear at Easter 2017. There is another four at various stages of research, preparation and writing. (I’ve also put out a collection of short stories abut the same characters – First Encounters – which is available as a free gift on my web site.)

I’d be delighted if anyone wanted to ask me anything about my books. It’s easiest to contact me at shlnovelist@gmail.com, or http://www.simonhardmanlea.com.

Guest Post – How to be a cynical romantic – with apologies to two great heroines.

What the heck is a “cynical romantic”, anyway? It’s a question I get asked a lot, which is fair enough because those are the two words I use to describe myself on my author pages on Goodreads and Amazon. And it does sound like a contradiction in terms.

If you look up “cynical romantic” on line, you’ll find blogs and sites talking about the difficulties of looking for love in the face of having been let down many times before. Which is a dilemma we can all sympathise with. After all, there are probably not many of us who have escaped that one to some extent.

But that’s not really what I mean when I the phrase cynical romantic to describe myself as a novelist. Sure, it’s true that I do write books about the emotional complexities of lives lived in dangerous times, but that’s only half of the story.
Let’s just go take a look at the words themselves: cynical means being mistrustful of other people’s motivation; always suspecting that people act from low motives. And romantic? Well, there’s a more tricky one. Does it just mean wanting to find physical or personal love? Take a look at the covers for all the books you find listed in the “romance” genre, and you’ll think that the obvious common factor is either men or women wearing a minimum of clothes – often leather, sometimes lace, depending on your own taste. Now that’s got a sound basis in the erotic, and I’m not knocking that at all. But romantic? I’m not so sure. It’s a bigger issue than that.  A romantic person is someone who had a grand, optimistic view of the world, who always wants things to turn out for the best.

So how the heck do those terms together, when they seem to be so contradictory? How can you be both optimistic and mistrustful at the same time? Actually, in literature at least, it seems to me it’s exactly that clash of the two sides of nature that makes for some of the most memorable characters. Try these two great classic heroines.

First up: Scarlett O’Hara in Gone with the Wind. On the one hand, we love her for her looks, strength of mind, her courage and her search for fulfilment.  On the other, we also know that she’s a calculating, manipulative and hard-hearted schemer. Wow! – it’s hard not to be a cynical romantic when you read GWTW. Even at the end, I never know whether to be relieved that the calculating side of Scarlett’s nature has been paid out, or to be sad that her romantic character has been so thoroughly disappointed.

Second: Elizabeth Bennet in Pride and Prejudice.  Now while any reader with a romantic disposition will be rooting for her to find her man in the saturnine Mr Darcy, those of a more cynical bent might wonder whether she is actually being very clever (and we know that she is very clever) through the whole story, in playing hard to get and therefore being much more intriguing and desirable to a wealthy man used to getting his own way. The cynic might be sceptical about motivation, while the romantic cynic can still revel in the fact that the two get married, however that came about.

Really, there’s nothing that stops you being able to look at the world both ways round at the same time. Try a game you can play by taking a detached look at your friends or family members or public figures. What would a cynic think about the way they act? But how does a romantic hope that things will work out for them anyway? Put the two together. It’ll still make sense.

See what I mean? Although the two terms sounds like contradictions, they’re not. The key is that in real life people are complex – their actions can be viewed in a number of different ways at the same time. And if that’s true for life, it’s got to be true for the characters in novels as well.

Simon Hardman Lea
Author The Sins of Soldiers and The Sorrow of Nurses
http://www.simonhardmanlea.com