Diane Magras grew up on Mount Desert Island in Maine. She spent much of her childhood reading and writing, but also outside: racing on seaside granite slabs, darting through birch-lined marshes, and hiking mossy forests. She is the editor, writer, and chief fundraiser for the Maine Humanities Council. She volunteers at her son’s school library, and is addicted to tea, toast, castles, legends, and most things medieval. The Mad Wolf’s Daughter is her debut novel.

Setting a Scottish Historic Fantasy Take a lass with a sword and an injured knight and send them off on a tense journey together to save her family (his enemies) from being hanged. That’s a snapshot of the premise of The Mad Wolf’s Daughter, my debut novel, which was published on March 6. When I set The Mad Wolf’s Daughter in medieval Scotland, I didn’t pick the Highlands, that glorious land of hills, glens, coasts, and mountains. I claimed the Lowlands (also a glorious land of hills, glens, coasts, and slightly smaller mountains), which is not what people usual think of when they think “Scotland.”

This region (scribble a line through the lower part of Aberdeenshire, cross over above Stirling, and loop up over Dumfries and Galloway to the coast) is simply the rest of Scotland. In the Southern Lowlands during the early 13th century (when The Mad Wolf’s Daughter takes place), the region held a population with a sense of Scottish identity but also many Anglo-Norman cultural influences (not so much in Galloway, which had its own distinct Scottish warrior vibe).

It’s that not-Highland-but-still-Scottish identity that I was interested in, and also the region dominated at times by England. The landscape, which includes the main battlegrounds of the Scottish Wars of Independence nearly a hundred years after my novel takes place, show identity through its castles.

Both the Scots and the English built these magnificent fortresses. Most castles changed hands, changed back, and many were destroyed by Robert the Bruce as a means to prevent these valuable bastions from falling into enemy hands again (battles and life were that uncertain). In only a handful of cases were these castles rebuilt. My obsession with castles and my interest in the medieval conflict between the Scots and the English (not to mention the Scots and other Scots), but also the similarities between the people of the region, was one reason I wanted to set my novel in the Lowlands.

That’s the history behind my novel’s Scotland. Or least a wee bit of it.

Ready for the fantasy part?

The Mad Wolf’s Daughter is technically historical fantasy because the conflicts I describe didn’t happen—and the landscape isn’t entirely real. Well, it is, but as a combination of elements of historical Lowland Scotland that I combined for a coastline and woods that suited my story’s needs. While you can’t quite follow my wee lass Drest, and Emerick, the wounded knight, on their adventure in Scotland, I can tell you a few places in the Southern Lowlands that will give you a sense of The Mad Wolf’s Daughter’s world.

Let’s start with the headland where Drest grew up and where the novel begins. Scotland is full of dramatic coastlines that would fit nicely for this setting, so I had my pick. One region in the Borders fit my needs nicely: St. Abbs Head in Berwickshire. This is a coast of jagged cliffs with nooks and crannies, rocks strewn in the sea below, and a rugged character, just the kind of place where my tough wee lass would grow up to be strong. Imagine what the rest of the world would feel like if this landscape was the one you knew best! 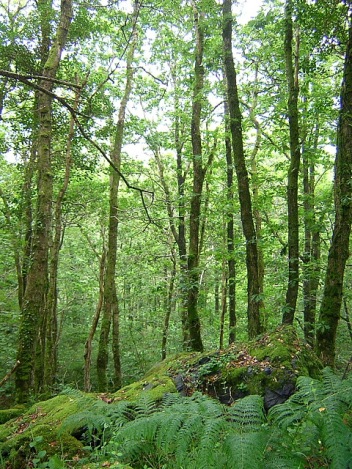 Drest knows her cliffs and stones, and knows a bit of what woods are like from the trees in a ravine on the headland. The woods she encounters on her journey are unfamiliar and often frightening. I wanted to use a landscape of ancient woodlands filled with moss, oaks, and pines. And a perfect match for my needs was the incredible Woods of Cree in Galloway (it’s managed by the RSPB—Royal Society for the Protection of Birds—a U.K.-wide charity). I haven’t had the chance to visit yet, but the pictures I’ve seen (such as the one above) helped me build the world I’ve tried to create. It’s also helped that I’ve lived in areas of Maine with similar forests, so I know what such woods smell, feel, and sound like. (And my copies of Complete British Birds and A Handbook of Scotland’s Trees have kept me accurate to my chosen region.)

Caption: Dirleton Castle isn’t quite a historic match for Faintree Castle, where Emerick lives and where Drest’s family are taken to be hanged, but it’s a castle in more or less the right region. And a beauty! Photo: Diane Magras

Picking a representative castle is the hardest part of this post. Most Lowland castles that would have fit Faintree Castle were destroyed in the early 14th century by Robert the Bruce, as mentioned above. And any surviving castle built in the era of my novel (Faintree Castle was built in the mid 1100s) would be, thanks to the ravages of time, in complete ruin by now. So picture this as a Norman castle, square-towered, built quickly but well, with two gatehouses, on an earthen promontory with cliffs below and cliffs all around it…all right, all right, like many castles in fiction, this may be the most fantastical part of my novel. Still, I encourage readers to visit just about any ruined castle in the Lowlands to get a sense of what being in a castle might have felt like.  That’s a brief snapshot of the Scotland of The Mad Wolf’s Daughter. I hope you’ve enjoyed this tour!