In The Bone Witch, Tea mastered resurrection―now she’s after revenge…No one knows death like Tea. A bone witch who can resurrect the dead, she has the power to take life…and return it. And she is done with her self-imposed exile. Her heart is set on vengeance, and she now possesses all she needs to command the mighty daeva. With the help of these terrifying beasts, she can finally enact revenge against the royals who wronged her―and took the life of her one true love.

But there are those who plot against her, those who would use Tea’s dark power for their own nefarious ends. Because you can’t kill someone who can never die…

War is brewing among the kingdoms, and when dark magic is at play, no one is safe.

Meet the Characters Post
Tea Pahlavi
• the resident bone witch
• abilities:
• can gauge emotions and feelings by reading one’s heartsglass
• knows medicines and herbs
• a necromancer, she can raise the dead and bind them to her lifeforce
• maintains a mental bond with the undead she raises
• can use Compulsion to force someone else to obey her commands
• exceptional at Dark runic magic
• very good at sneaking out
• likes: paloodeh dessert, riding her three-headed dragon, dancing
• dislikes: Kalen
• quote: “Take a girl and remove her heart. Add a touch of tragedy and a thirst for vengeance. Divide her into equal parts of grief and rage, serve her cold.”
Fox Pahlavi
A previously deceased soldier and Tea’s older brother; now her familiar
• abilities:
• as an undead, is invulnerable to pain and injuries; can survive fatal wounds and reattach his own limbs if necessary
• a really snarky mouth
• the second-best swordsman of Kion
• basically a human shield
• likes: sword practice, pushing boundaries
• dislikes: arrogant nobility, cemeteries (ironically)
• quote: [after being impaled] “I’m fine. A little heartache never killed anyone.”
Inessa of Kion
The princess of Kion, and heir to Queen Alyx
• abilities:
• she’s a princess, with everything that suggests
• likes: wandering the city, pretty pendants,
• dislikes: smartassed boors, being stuck inside
• quote: “I won’t hesitate if it comes to a fight. But I don’t want to always be a victim. Teach me to be useful. Please.”
Khalad
The Heartforger, brother to Prince Kance, cousin to Kalen, and former noble
• abilities:
• as the Heartforger, can recreate heartsglass by pulling memories from those willing to give them up and reassembling them into new ones
• maintains and heals heartsglass to restore its owner to health
• likes: his work, his work, and of course, his work
• dislikes: having his concentration broken, his father
• quote: “Guilt’s a popular ingredient. Everyone’s always looking to unburden their guilt. It’s the other emotions people have trouble parting with. Happiness, always. Even sadness. Most people don’t want to part with their sadness, surprisingly enough. You’d think it was the opposite.”
Kance of Odalia
The prince of Odalia and the next in line to the throne; brother to Khalad, cousin to Kalen, and son of King Telemaine
• abilities:
• diplomacy
• running the day-to-day administration of his kingdom
• immense likeability
• absolute obliviousness to Tea’s crush on him
• likes: good music
• dislikes: being beholden to someone else
• quote: “To be a ruler goes beyond lawmaking, and if there is a creature terrorizing my land, then I will not hide behind my throne like a coward.”
Kalen
The Duke of Holsrath, cousin to both Khalad and Kance, and a Deathseeker
• abilities:
• as a Deathseeker, can summon runic and elemental magic
• the best swordsman of Kion
• expert strategist
• doesn’t give a rat’s ass about a lot of things
• likes: training, fresh air, horses
• dislikes: anything requiring patience, certain stubborn Dark asha
• quote: “You look like a little thundercloud hovering in the middle of a field of sunshine.

The First Book in the Series

The beast raged; it punctured the air with its spite. But the girl was fiercer.

Tea is different from the other witches in her family. Her gift for necromancy makes her a bone witch, who are feared and ostracized in the kingdom. For theirs is a powerful, elemental magic that can reach beyond the boundaries of the living—and of the human.

Great power comes at a price, forcing Tea to leave her homeland to train under the guidance of an older, wiser bone witch. There, Tea puts all of her energy into becoming an asha, learning to control her elemental magic and those beasts who will submit by no other force. And Tea must be strong—stronger than she even believes possible. Because war is brewing in the eight kingdoms, war that will threaten the sovereignty of her homeland…and threaten the very survival of those she loves. 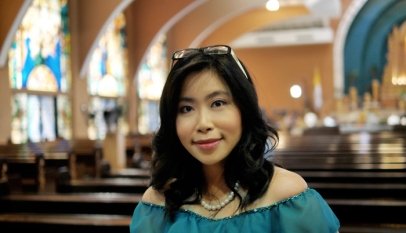 Despite uncanny resemblances to Japanese revenants, Rin Chupeco has always maintained her sense of hummus  Raised in Manila, Philippines, she keeps four pets: a dog, two birds, and a husband. She’s been a technical writer and travel blogger, but now makes things up for a living. The Girl from the Well was her debut novel.