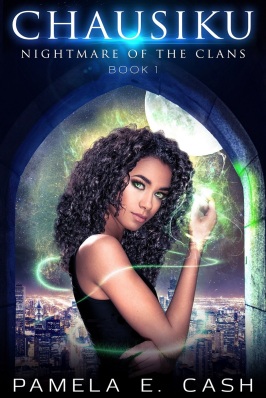 Nightmare of the Clans (Chausiku #1)

John is ready to teach her how to fight but there isn’t much time. She must deal with her harsh new reality fast if she wants to stay alive…because her mother’s killer is looking for her. 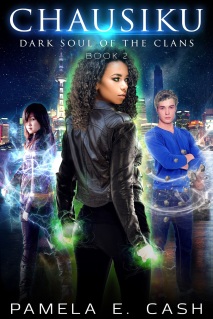 Chassie has discovered the six powerful clans across the world and inherited her supernatural abilities. She fought and won a major battle but her intuition tells her that the war isn’t over. The clans have a secret…and Rasul has a secret weapon. 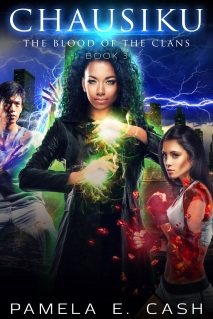 The Amaru clan has attacked the Qiao clan…the Sakombi clan has a traitor in its midst… and Rasul is more evil than ever. Is it all about Chausiku or is there a new threat? 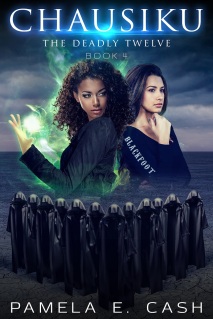 The Natosapi clan has arrived and to Chassie’s horror she now knows why they are so feared.

The real battle has begun.

EXCERPT FROM CHAUSIKU
NIGHTMARE OF THE CLANS
BOOK ONE
As the driver steered the car through the airport traffic, Adamma closed her eyes and concentrated on Rasul.  It only took a moment for her to locate his mind and send her thoughts into his head.
Rasul, I know you can hear me.  Meet me at George’s house.  Let’s talk.
Surprised by the sudden voice in his head, Rasul dropped his fork.  It landed with a clang on his dinner plate.  He jerked his head up and tilted it to the side as if he could hear the voice better that way.  Then he engaged his abilities and tried to detect Adamma’s location.  Nothing happened.  His eyes squinted in an attempt to concentrate harder and increase the intensity of his ability.  He had the power to sense when other clans were using their abilities and to pinpoint their location.  Still…nothing happened.
Strange, he thought.  I can hear her but I can’t sense her or locate her.  Somehow, she is able to block my abilities while controlling her contact with me…I wonder if she knows I can’t sense her.
Yes…I know, said the voice in his head.
He raised his eyebrows then lowered them.  He might as well give up trying to locate her and talk instead.  Hello, Adamma, he communicated, you are much stronger than you were the last time I saw you.
Again…I know.
So, you have been training…and now you’re even stronger than your mother.  She can’t block me from sensing her.  But I’m surprised you are contacting me.  Have you finally realized I’m right?
Like I said, Rasul, let’s talk. Will you meet me?
Where?
At George’s house.
With Elizabeth and the whole Spencer clan there too.  Now why would I walk into a trap?   I’m insulted you think I’m that stupid.
Of course I know how brilliant you are, she retorted sarcastically.
The mockery dripping from every word wasn’t lost on him. But he was too curious to refuse to meet her.  Besides, he doubted Adamma would flat out try to kill him.  It wasn’t in her nature…and he couldn’t help the hope that flickered inside of him.
I can be there tomorrow.
Fine…I’ll see you then.
She abruptly cut her connection to Rasul, opened her eyes, and tilted her head to look out of the window.  London hadn’t looked so beautiful to her since the day she arrived to attend the university.  And she had never felt so calm.
Thirty minutes later, her taxi drove up in front of George’s house.  She paid the driver, refused his help with her luggage then walked through the front yard to the door.  George already knew she was there because Malika had contacted his mother telepathically.  She could hear all of them constantly calling out her name in her mind…telling her to wait until they got there before she contacted Rasul.  She ignored them.
When she reached the front door, she stared at the doorknob.  Her green eyes sparkled as she concentrated on moving the lock with her telekinetic ability.  The lock clicked and the bolt slid back.  She turned her head slightly and glanced down the street to make sure no one was watching her.  Then the door flew open and she walked inside.  Her luggage lifted from the ground and floated in behind her.  She settled in for the night.
Early the next morning, she cooked a light breakfast and then did her training exercises.  By the time she finished, her clothes were soaked with sweat from working out her body and her abilities.  She showered, got dressed then headed for the living room.
A moment later, she stood in the middle of the living room, raising her arms on each side.  Gold flecks shimmered within her green eyes as she engaged her powers.  The windows in every room slammed shut and the blinds closed.  The double bolts on every door locked.  The furniture sailed across the living room and settled against the wall.  The knives flew out of the kitchen drawers, into the pantry and its door locked.  When she was done, her eyes stopped glimmering and she scanned the living room with a satisfied expression on her face.  She tilted her head towards the cushioned chair against the wall and it soared across the room then stopped beside her, facing the front door.
Slowly she sat down in the chair, leaned back and waited…
About the Author
Pamela E. Cash is a lawyer living in Chicago. She loves all types of science fiction but as a child she became hooked on the Marvel comic books she swiped from her brother’s room. Her favorite character has always been and will always be Thor! Her daughter shares her enthusiasm for supernatural characters and is her inspiration for the Chausiku Series.
Author Links:
http://www.pamelacash.com
https://www.instagram.com/chausikubooks/
https://www.facebook.com/chausikubooks
https://twitter.com/chausikubooks