All That We See or Seem
by Kristina Bahr
Genre: YA Dark Fairy Tale
Release Date: May 2018
Uncommon Universes Press LLC

Every night, seventeen-year-old Reeve Lennox finds herself under a noose.

By day she is a lady of Acarsaid’s royal house, daydreaming of adventure and love. But every night in sleep she wanders through a nightmarish city, an invisible witness to the screeches of monsters and the screams of their victims. Her only consolation is Bran, a battle-torn young man with a selfless heart and eyes that reflect the stars.

Yet while Reeve falls deeper into her dreams, in truth she is engaged to Arden, a mercurial nobleman who has long been cured of his belief in love and breathes fire and flattery like other people breathe air.

Torn between two lives, Reeve struggles to remember what’s real, until night and day collide, with a revelation that threatens all of Acarsaid.

All That We See or Seem on Amazon

A Dream Within a Dream

Invisible to the man she loves, Reeve Lennox fights to reclaim him from a dark world.

As her wedding day nears in Acarsaid, her betrothed Arden offers only his wayward soul and saucy tongue. At night she desperately tries to reach Bran, the young soldier of nightmarish Tenebris who holds her heart. However, her king insists that the realms of Tenebris and Acarsaid must remain separate, lest the evil wizard Rancore brutally conquer all.

But the dark magic of Tenebris defies mere distance. A war is coming, one only Reeve may be able to prevent, if she can reunite her family on opposing sides.

With two kingdoms at stake, Reeve must discover her strength and her family’s legacy before all is lost. Yet righting the wrongs of the past may require the sacrifice of her truest love.

A Dream Within a Dream on Amazon

The nature of a dark fairy tale.
I didn’t set out to write a dark fairy tale. Honestly, I’m not sure I can retrace the steps that led my story down that path. I started with the nugget of an idea — a girl who falls in love with a boy she meets in her dreams — which could have taken any number of directions. It was only looking back upon the story I created that I saw the elements of a fairy tale layered within.
There’s the hero’s journey, of course, or in this case, the heroine’s journey. Reeve starts with her head firmly in the clouds, wanting nothing but for her life to begin, not realizing that she’s already in the midst of it. Not realizing how much is within her own hands. She grows and shifts and evolves over the course of the two books in so many ways, taking the reins and standing up for her own desires.
There doesn’t have to be a castle or royalty in a dark fairy tale, but those are fairly common elements! I upped the ante with two castles and two kings, split between two kingdoms — Acarsaid and Tenebris. The former is light and airy and idyllic, while the latter is dark and sharp and sinister. Tenebris also has giant murderous falcons, so… yikes. They, in particular, feel very darkly fairy tale-esque to me, with their killing song and hunger for human flesh.
I suppose there also doesn’t have to be any romance, but it certainly doesn’t hurt, does it? Even better if it’s forbidden love! Reeve has two love interests, one in each of the two kingdoms, and let’s just say, neither is without its trials. But also… neither is without their attractions.
And there should always be a moral. Some lesson to be learned. I can think of a few to be found within All That We See or Seem and A Dream Within a Dream, but to me, the biggest is: you have the power to control your own destiny. Don’t squander it. 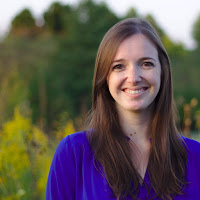 About the Author
Kristina Mahr devotes her days to numbers and her nights to words. She works full-time as an accountant in the suburbs of Chicago, where she lives with her two dogs and two cats, but her true passion is writing. In her spare time, she enjoys spending time with her family and friends, reading, and waking up at the crack of dawn every weekend to watch the Premier League.