*** Disclaimers: I received an e-ARC of this book in exchange for an honest review. All opinions are my own. In regards to the book: trigger warnings of parental abuse and self-harm.***

“When the dust hit, it burst into flames.” – Emily A. Duncan, Wicked Saints 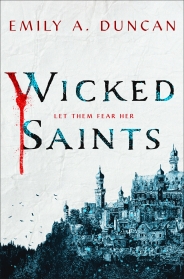 As an aside: while there were many quotes in this book, I have them all bookmarked to adore later, I decided on this quote to open my review because – I’m still reeling.

Darkness and magic? Yes.
Now onto a brief summary of the book.

As book one in the Something Dark and Holy trilogy, readers are introduced to three characters: Nadya, the Kalyazi cleric who can communicate with all the gods and is looked as the savior of her people. Serefin is he High prince of Tranavia who is a powerful blood mage sent to the battles fields by his power-hungry father. And the enigma, Malachiasz, who is a defector from a faction in Transavia that I cannot say without giving away a spoiler. These three cross paths to come together to “assassinate a king and stop a war.” A war that I might add has been going on for centuries and nearly decimated both sides. The people are starving, beaten, and hope is fading.

Wicked Saints was my most anticipated books of 2019 and let me tell you, it was intense. While some aspects of the book – a transition hiccup here or there or a stilted character development  – I adore this story. What did it for me? The characters. The blood magic. The emotion…

Every character was stuck in this moral gray area seemed to suffer from this internal angst. Do I do this or this? Why am I fighting? What am I fighting for? Originally I had worried some characters would be reduced to their part, such as “the foil” or “the love interest.” But while some had some specific roles to play, each was guided by their own moral compasses, from side characters such as Rashid, Parijahan, and Ostyia to the big three and each and every character had their own story, personality, hopes, fears. I continue to think of them and wonder at what they will become as the story continues. Even the gods had personalities (though some were one dimensional).

Perhaps the only one I had trouble connecting with at times was Nadya. She felt a little stifled at times, maybe even displaced in her own POV, and yet the more I reflect on her, the more I can accept. She was raised to believe she had one purpose, one role, and followed strict guidelines that shaped her believes and emotions until all of that was turned upside down and she was forced to make her own decisions while the familiar comforts of friends and a home were stripped away. It will take her a bit but I have hope.

Overall, I could continue with a fangirling session on Serefin and Malachiasz – taking apart what I liked and didn’t like and how much I wanted to give them a hug. I could then swoon further on the mixture of magic and religion into something dark and twisted yet consuming… using blood for spell casting…

But I’ll let you decide because in this book – right and wrong, lies and truths, create a world where anything could happen.

I give Wicked Saints 5/5 stars.