Glow of the Fireflies

Synopsis:
Briony never planned to go back to the place she lost everything.
Firefly Valley, nestled deep within the Smoky Mountains, is better kept in her past. After an unexplained fire gave Briony amnesia, her mother disappeared and her dad moved them to Knoxville.
But now her grandmother needs a caretaker and Briony’s dad volunteers her to help. The moment she returns, her whole world shifts. She feels a magical connection to this valley, as if it’s literally part of her somehow.
And when she meets a hot guy who claims he was her childhood friend but now mysteriously keeps his distance, Briony starts piecing together her missing past…and discovers her mother didn’t leave to start a new life somewhere. She’s trapped in the hidden world within the valley.
Now, Briony will do whatever it takes to rescue her, even if it means standing up against dangerously powerful nature spirits. Even if it means giving up her first love.
Book Links:

Glow of the Fireflies – Dream Cast
I’ve never made a dream cast before! This was so much fun! I know we authors don’t get any say in whether or not we get a movie, much less who we would cast, but it’s nice to dream.
Briony Redwrell – Camren Bicondova
Camren Bicondova is a great young actress from the FOX TV series, GOTHAM. She portrays a young Selina Kyle (aka Catwoman) who befriends the young Bruce Wayne. She’s a street kid orphan with a lot of spunk and self-assurance. Some of this easy confidence would be reflected in her role as my main character, Briony Redwrell, in a movie version of GLOW OF THE FIREFLIES. Briony may question herself sometimes, unsure of who she was before the fire that stole her memories, but she’s stubborn and knows what she wants. When she goes after the nature spirit who could have answers to her hidden past, it is with all the tenacity and ferocity reminiscent of Selina Kyle. Plus, Camren’s wild light brown hair is just like Briony’s.
Alder – Jeremy Irvine
I’ve gotta be honest…I mostly picked this guy based off his looks. I know what you’re thinking, “but, Lindsey, that’s so shallow!” and you’re right, but that’s also why this is a dream cast. ;P
Alder is Briony’s mystical childhood friend—a boy from her past that may have all the answers to every question she’s ever wondered about herself. Attractiveness aside, the actor who plays Alder must, more than anything, be a very soulful character with a lot of heart. He has to be kind, caring, and a little…sad. He lost his best friend, the girl he loves, for six years. Jeremy Irvine, best known for his role in War Horse, would do well in showing the pain and regret it comes with losing someone and the hope in finding them for a second chance.
Isabelle “Izzie” Jennison – China Anne McClain
Best known for her role as Uma in Descendants 2 and 3, China Anne McClain is perfect for the role of Briony’s best friend, Izzie. She can play a sassy, obstinate character, whom Izzie definitely is, while also being the sister and confidante that Briony needs—a role that’s similar to her character in the CW show, Black Lightning.
Gran – Blythe Danner
Growing up in the late 90’s and early 2000’s I was a Will & Grace fan, which meant I was well acquainted with the charming actress, Blythe Danner. She has an energy on screen that has a mother’s touch, but also feisty, stubborn, and a bit mysterious, which is Briony’s estranged grandmother to a T!
Raysh – Richard Madden
Raysh is a fox spirit, so even though we couldn’t enjoy Richard Madden’s gorgeous face on screen, we could revel in his smooth, delectable voice dishing out sardonic lines right and left. Well known as Rob Stark from Game of Thrones, Richard Madden has taken on a variety of roles like Prince Charming in the live action 2015 Disney’s Cinderella and an ex-soldier suffering from PTSD in British political drama, The Bodyguard. What do all three roles have in common? Richard Madden has a helluva fine voice and I can’t imagine a better depiction for my smarmy fox spirit.
About the Author 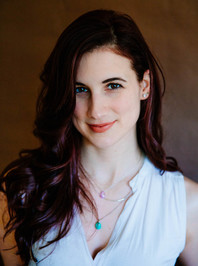 Lindsey Duga is a middle grade and young adult writer with a passion for fantasy, science fiction, and basically any genre that takes you away from the real world. She wrote her first novel in college while she was getting her bachelor’s in Mass Communication from Louisiana State University.
Other than writing and cuddling with her morkie puppy, Delphi, Lindsey loves catching up on the latest superhero TV show and practicing yoga.
Social Media Links: